Ethology is an underappreciated field of biology that is often overshadowed by the more common ‘E’ keywords like Evolution, Environment, Ecology, Extinction, so on and so forth. I certainly didn’t hear the term until well after college, let alone in a grade school science classroom. As an independent field of study, however, it is an extremely important topic for citizen scientists observing animals in the field to have an introductory understanding of.

Ethology is derived from ethos, and as the name may imply it is the study of animal behavior from a biological and evolutionary perspective. This is parallel to but distinct from the science of behaviorism, which can be overgeneralized as the study of learned behavior under artificial stimuli (like a lab, a zoo, or your living room.) Ethology is the study of how a species of parrot is able to cooperatively pull on a string to acquire a food reward without being able to see the other bird and how such a natural cooperative ability may have evolved to enhance the reproductive fitness of the individual. Behaviorism would be documenting the fastest training method for teaching that parrot to curse you out.

Applied animal behavior (or Skinnerian behaviorism, named after B. F. Skinner, a Harvard professor who during WWII trained pigeons to drive nukes) is the foundation for how we as humans interact with animals in a captive artificial setting. The principles of how to manipulate animal behavior to achieve desired actions in exchange for stimulating rewards are common to both your dog rolling over on command and a tiger at the zoo admitting itself for a blood draw. As field biologists who observe animals in a natural setting, it is usually more appropriate to ask questions stemming from the field of ethology, although in some circumstances the two overlap (i.e. altering the foraging patterns of local birds with bird feeders, or altering the migratory patterns of elk through hunting). Learning is itself a natural behavior that occurs in the wild that every species (even goldfish and bees) have varying capacities for. 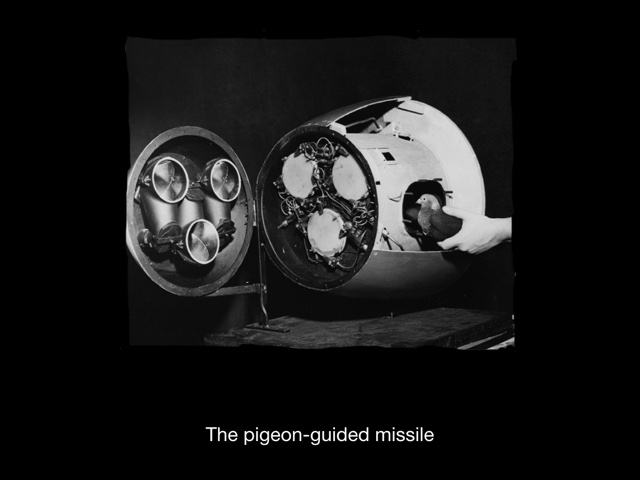 As I’ve hinted earlier, ethology is primarily focused on analyzing the natural behavior of a species as a consequence of its evolutionary history. This is an important connection to keep in mind because it implies that natural, evolved behaviors are consequences of natural selection.

As a quick aside, there are many misconceptions regarding the mechanism of evolution which are more appropriate to discuss in a separate article, but a very relevant one to knock out right here is this: natural selection (and therefore evolution, as its primary engine) selects for reproductive fitness. It is not survival of the fittest in the sense of which individual strongest, the fastest, the smartest. They are all means to the end of passing on ones genes. The simplest way to look at animal behavior is that everything an animal does was selected for over generations because it increased that individual’s chances for reproductive success. Notice how that individual’s survival isn’t even in the equation: survival is just a means for achieving reproduction. Individuals often substantially decrease their own survival odds and suffer greatly to achieve reproductive success. Survival of the species doesn’t matter either: reproductive fitness is a selfish venture, and the proof of this lies in how infanticide by dominant males has evolved independently in many distantly related species.

Even your dog isn’t exempt from these laws of evolution. Sure, playing dead on command is cute and all, but an evolutionary behavioral scientist (i.e. ethologist) looking at Roxy respond to your commands would point out that the global population of pet dogs is around half a billion and rising with again that many running feral, making it the most populous carnivore on the planet. Friendliness towards humans turned out to be extremely good for reproductive fitness.

We at the Olympic Project are big proponents of applying the established principles of biological science that hold true for every species both extant and extinct on this planet to our target subject. And since so many Sasquatch reports are not sightings but rather purported behavioral observations, viewing such potential behaviors through the scope of ethology gives us a structured framework to pose hypotheses and seek answers.

For example, many unknown vocalizations have been attributed to Sasquatch by process of elimination, and it is common practice to mimic these sounds in the field in the hopes of eliciting some sort of response. The ethologist would observe this phenomenon and ask, “how does this behavior serve to improve the reproductive fitness of the individual performing the behavior?” Maybe it’s a mating call adapted to enable a low density, solitary population to more easily locate partners. Maybe it’s territorial in nature, designed to maximize the amount of resources available to an individual by fending off competition. The answer is not possible to know for sure without rigorous testing and observation, but it is possible to at least lean in the direction of a more probable explanation by aggregating large amounts of reports and looking for temporal patterns that may correspond to a breeding season or periods of intense resource competition like the annual salmon runs.

Similar questions can be asked about other purported behaviors such as rock throwing, wood knocking, following power lines, etc. How does the behavior improve the reproductive fitness of the acting individual? If we can guess the correct evolutionary reasons for why an animal performs a certain behavior, we can put ourselves in a better position to repeatedly observe that behavior, and with it the organism itself. The answers to all of the above questions have not been formally decided yet, no matter what you see on TV. It remains up to you and everyone else interested in the target species to ask the right questions, formalized under the conventions of biological science, so that we may have a structured path to testing for the right answer. And if any of you can reproducibly prove the evolutionary reasons for vocalizations, David Ellis and I want to be co-authors on your manuscript submission to Ethology.