This blog is intended to provide scientific context and theory for Sasquatch as a subfield of natural history and paleoanthropology. I don’t want to engage in “debunking” threads or make a habit out of offering opinions on internet “evidence” on the regular, but there is educational value in pointing out anatomical markers that can give you a pretty good idea of whether a figure in a video is a potential target subject or a half-assed costume trick. As researchers, it helps the field as a whole to be able to quickly filter out false positives and avoid diluting our attention and political capital on material that is unlikely to represent the target subject.

First off, as a rule I only consider video shot in broad daylight at reasonably close range to be worthy of analysis. This is partially based on the academic precedent of requiring novel contributions to advance a field of study past the current state of the art, and for the last 54 years that has been the Patterson-Gimlin Film. Regardless of your personal opinion on the film, there is no other footage that offers as much information and detail as this, and no thermal silhouette, shadowy phone recording, or any single image of any quality will suffice to surpass this current gold standard. Still photos are much easier to fake and edit convincingly than a live-action video, and video can offer additional biomechanical clues by potentially revealing additional anatomy or movement mechanics that would also be more difficult to fake.

So if you are a researcher out in the field looking to shoot the next PGF, this is what you need:

An example of what I consider “admissible” footage is the Josh Highcliff recording from 2013. The subject is filmed in broad daylight at close range with enough direct light to see more than just a silhouette, and is unambiguously either a real unidentified animal or a hoax. It is also performing actions that are plausible for a real animal to be doing in this environment (tearing apart a dead tree, presumably looking for food rather than walking aimlessly across a camera FOV.) I am not making a verdict on the authenticity of the footage, but there is enough visual detail and behavioral observation to warrant consideration and nothing about it that immediately disqualifies it as an easy hoax. So, it goes in the “plausible and interesting” bin for me.

Any video that is shot at too far a distance, with too low resolution, or with not enough direct light to identify what is being filmed is just too ambiguous to merit further study. There is some footage, like the Freeman Film, that are on the border because they are pretty unambiguous in what they are depicting but have too much obstruction from vegetation or shadow to see more than just a silhouette, on top of being low resolution.

When daylight film is shot and depicts an unambiguous bipedal subject in motion, there are a few anatomical landmarks that can very quickly filter out hoaxes that everyone should look for. The most visible of these is the head, as decent quality daylight film always shows this feature clearer than the rest of the body and an obstruction of the head almost certainly means the entire body is in too much cover or shadow to merit serious consideration. Even in 2021, there is a fundamental misunderstanding in how ape heads (and Sasquatch by extension) are shaped by much of the general public.

Modern Homo sapiens are distinct from all other known apes both living and extinct in having a very reduced brow ridge and a high vertical forehead. This was true even compared against some of our closest prehistoric human relatives, the Neandertals and Homo erectus, despite the former actually having larger skulls and brain volumes than our species on average. This unique shaping of our skull is usually credited to our large frontal lobe, which is associated with self-awareness and other high level mental faculties. 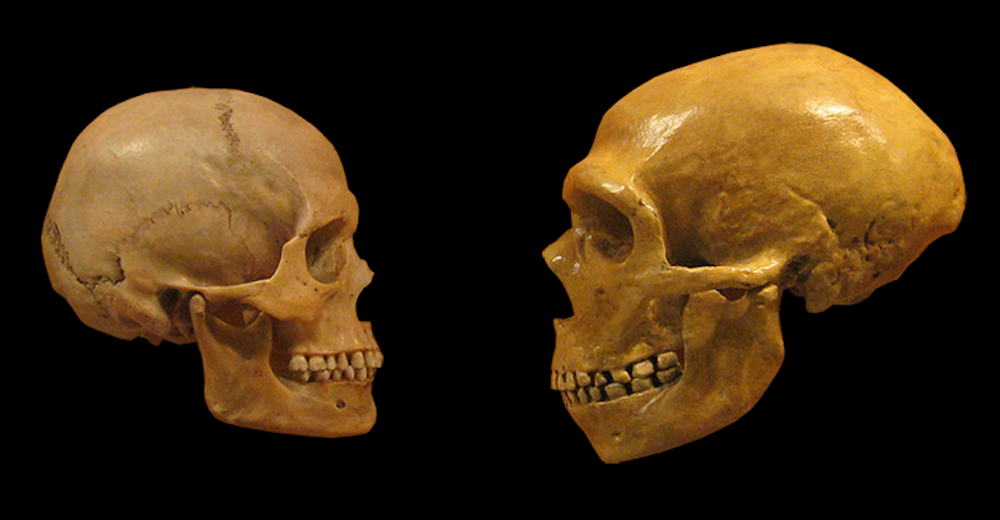 The vertical forehead in humans is an example of an apomorphy in phylogenetic terminology: it is a trait that is uniquely derived in Homo sapiens in the last ~300,000 years and was not present in the last common ancestor between us and any other hominin. It also conveniently creates a massive problem for anyone attempting to fit this kind of head shape into a mask that looks distinctly ape-like. Ape heads slope back steeply from their pronounced brow ridge, sometimes ending in a sagittal crest that peaks at the back of the skull. In species that are very distantly related to us (like gorillas), this slope is so steep that the forehead almost appears concave. As special effects veteran Bill Munns used to say, “you cannot lop off the top of an actor’s head and expect him to remain ambulatory.” 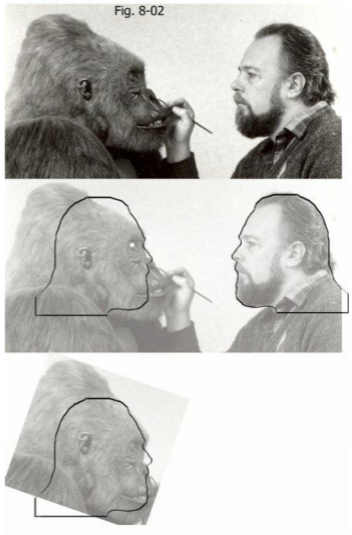 Diagram from “When Roger Met Patty” showing how, even though a gorilla head is larger than a human one, the human forehead cannot be made to fit within the low sloping forehead of a gorilla skull with the eye sockets aligned. Some standard “cheats” are necessary to create this illusion. Credit: Bill Munns

Since you cannot subtract volume from a human actor’s forehead, the historical way ape suits got around this constraint was to add volume to other parts of the head to make the forehead smaller and more sloping in relation to the rest of the skull. In this example from King Kong Lives (1986), the muzzle was pushed out and bulk added to the rest of the mask structure to give the illusion of a low sloping forehead and a sharp brow ridge. 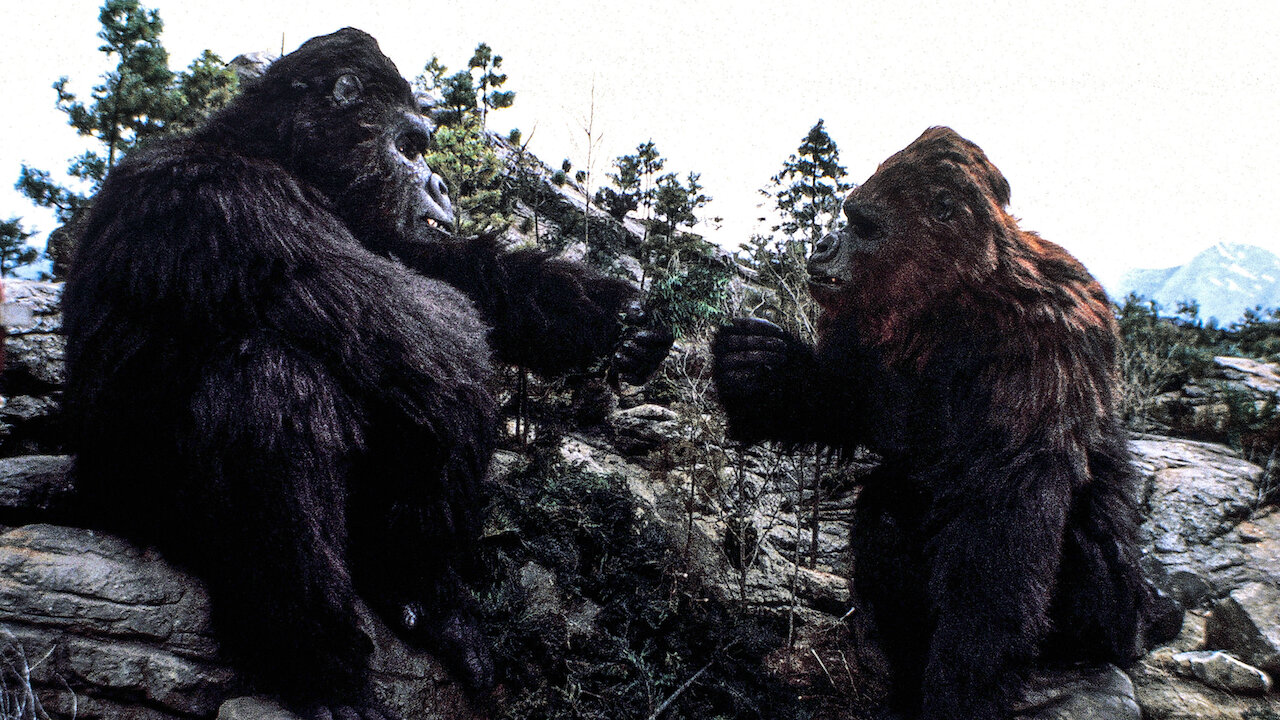 However, in comparison to a real gorilla, the size of the head and especially the face are comically exaggerated in relation to the rest of the body as any mask construction will only add to the total size of the head. A real human cranium with a tall vertical forehead must somehow fit inside the space of the mask while still allowing the actor to see, breathe, and perform. 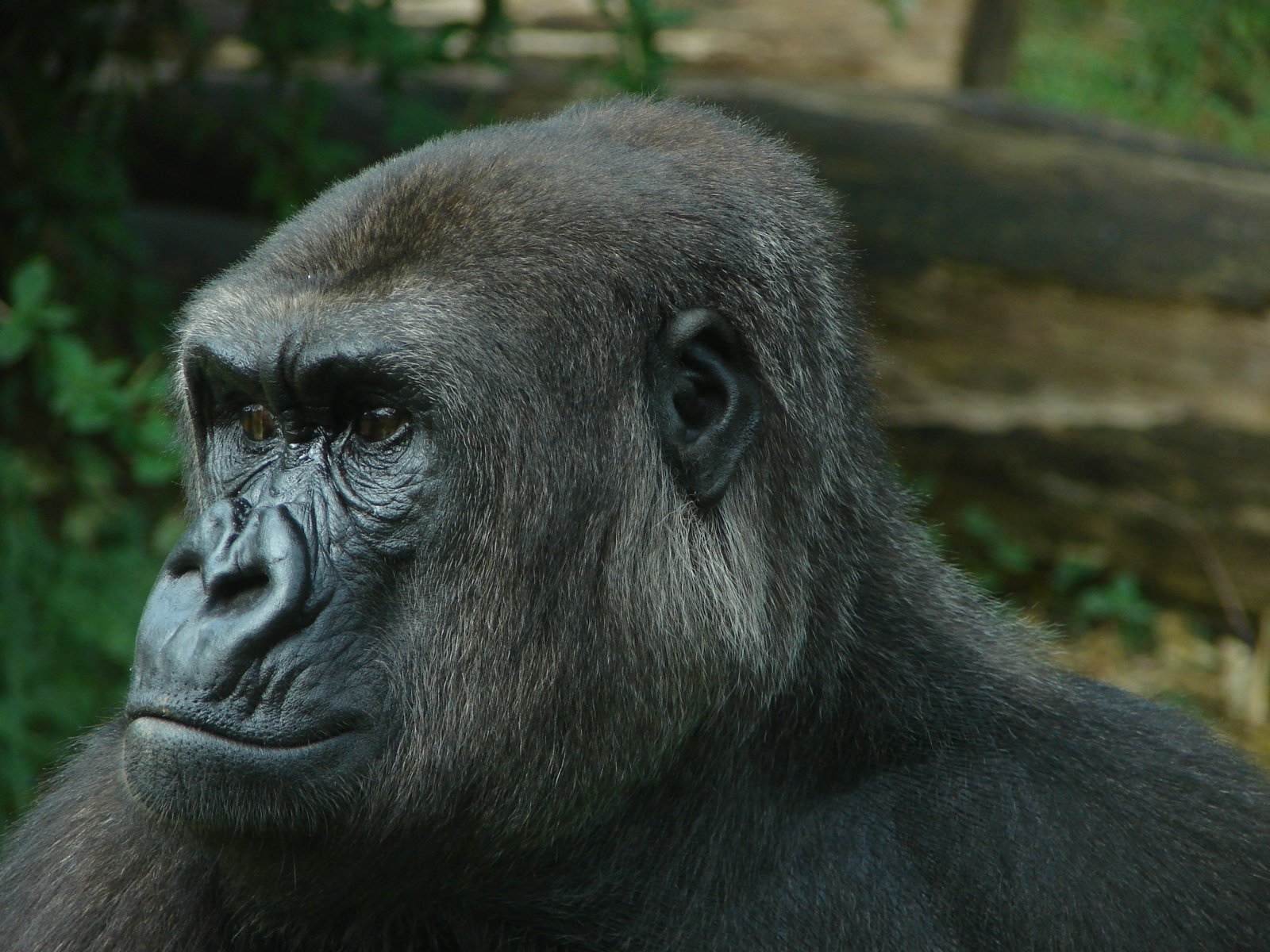 A real gorilla head is smaller, lower, and has a more posteriorly located crest than the costumes. Credit: Rob Barmentlo

An inspection on the shape of the head from a side profile is possible on even low resolution video as long as there is an unobstructed view of the head. On the PGF, there are frames both before and after the famous lookback that give a very consistent depiction of the skull shape of the subject. The forehead is very low and sloping, with a very slight crest peaking at the back of the head. Importantly, the head is relatively normal sized for the body, meaning a real human head that can fit inside a mask of this shape must be even smaller, comically so, for the size of the subject. Additionally, the face is mostly flat (orthognathic, a condition of bipedal hominins that evolved in more derived Australopithicines ~3 mya) as opposed to the protruding muzzle of non-human primates (prognathic, the pleisiomorphic ape trait found in chimps and gorillas) meaning nothing was added to the head to deemphasize the presence of a large human forehead. 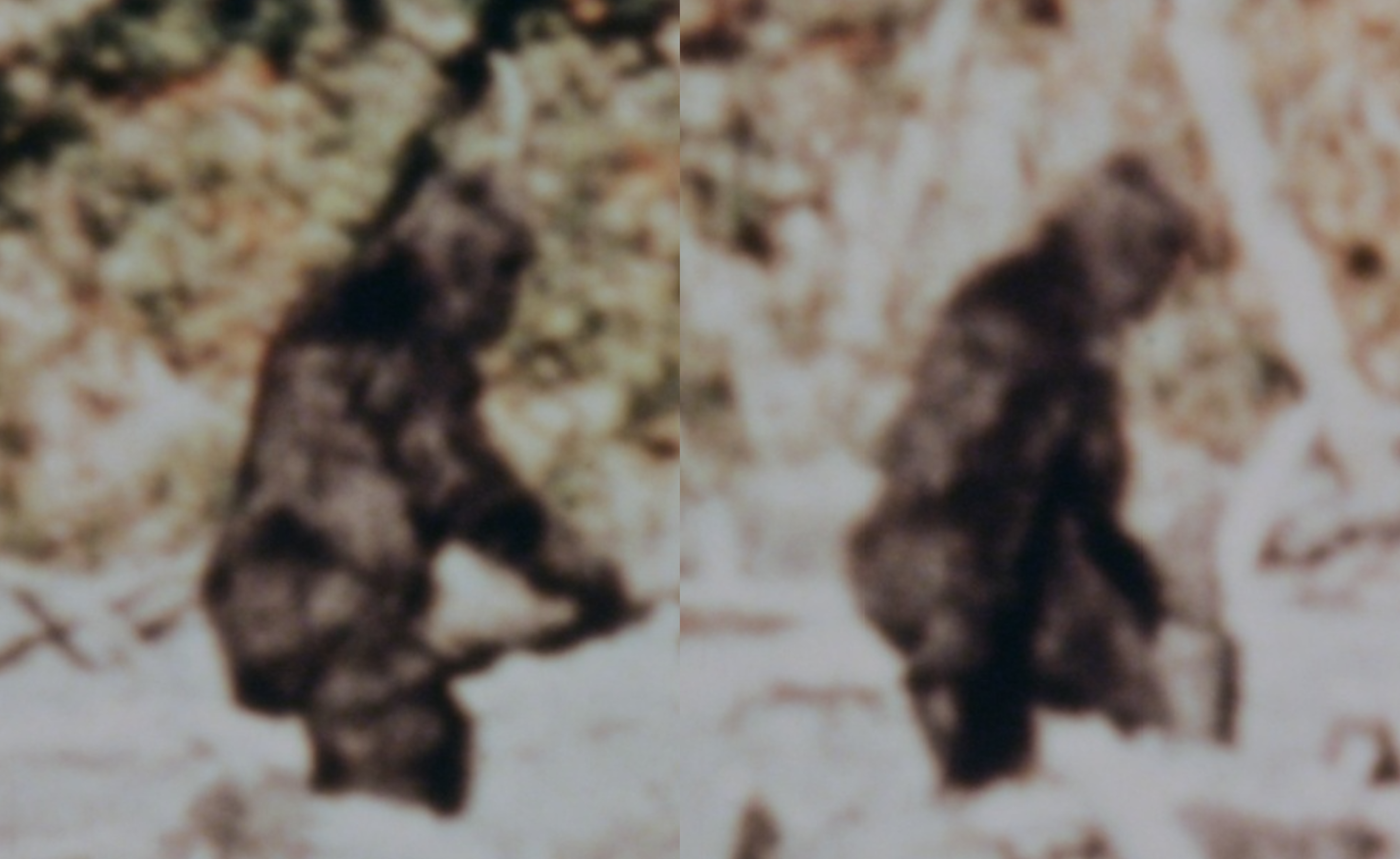 Frames from right before and right after the lookbook at Frame 354, showing a consistent head shape outline with a low forehead and a slight, posteriorly oriented sagittal crest.

Similarly, on the Highcliff footage, there is a brief moment where the head of the subject turns barely enough to see what looks like a flat head top sloping back from a sharp brow ridge, and a posteriorly placed sagittal crest that drops straight down to the back of the head and neck. This frame occurs at 1:26 in the above linked video right after the subject pulls something out of the tree and appears to put it in its mouth. 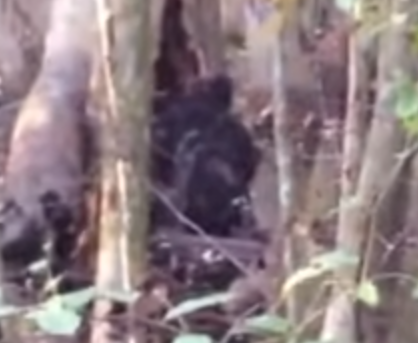 This head shape is the ancestral condition for great apes and makes evolutionary sense for an omnivore adapted for processing large quantities of tough food without the aid of fire or stone tools. Pre-Homo hominoids often had concave recesses in the parietal and temporal bones behind the eye sockets to make room for massive chewing muscles that passed through the zygomatic arch and attached to the extra surface area of the sagittal crest, a feature called postorbital constriction. This limited the volume of the braincase but greatly increased the chewing power of the jaws. Modern humans sacrificed jaw power for brain volume by expanding the cranium into a convex sphere and made up for the digestive disability with cooking and tool use, behaviors that this target subject does not exhibit evidence for. So the most parsimonious assumption of the skull shape of Sasquatch based on its behavior and life history would place it more like the robust Australopithecines and less like Homo, least of all the highly derived braincase shape of Homo sapiens. 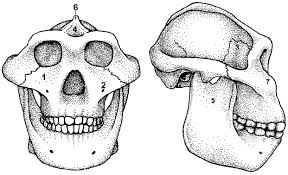 Compare the two observed head shapes to the female gorilla depicted above, and to the movie gorilla costumes that were created almost 20 years after the PGF was shot. The gorilla face is much more prognathic, but the outline of the top of the head, sagittal crest, and the straight line down from the top of the crest through the neck are very similar. A more similar comparison of skull shapes can be made against extinct bipedal apes such as the robust Australopithcine Paranthropus boisei. Notice the complete lack of a forehead and the posteriorly placed sagittal crest paired with a flat, orthognathic face. 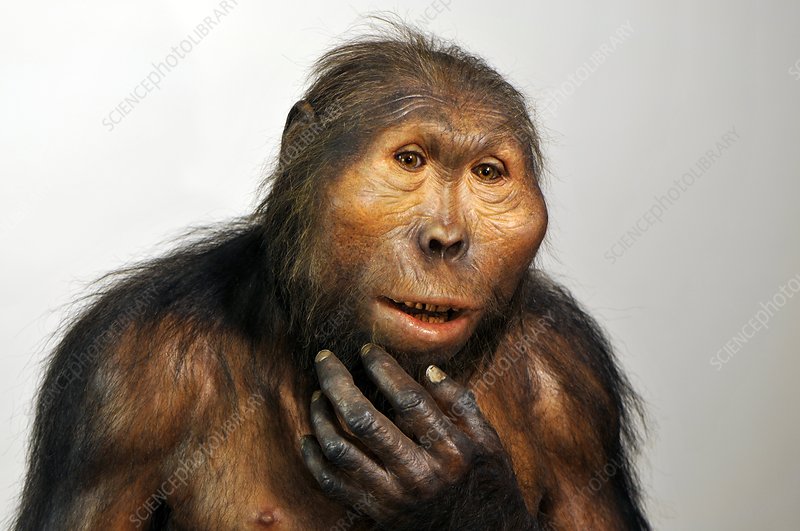 Most bigfoot costumes (and really, any costume of any kind including famous ones like Chewbacca) will just ignore the forehead problem and extend the forehead straight up, peaking at the middle of the skull and creating a side profile that looks like a conehead. This is not realistic cranial anatomy for any ape living or extinct and abuses the public’s general lack of appreciation for realistic skull shapes of non-human apes. 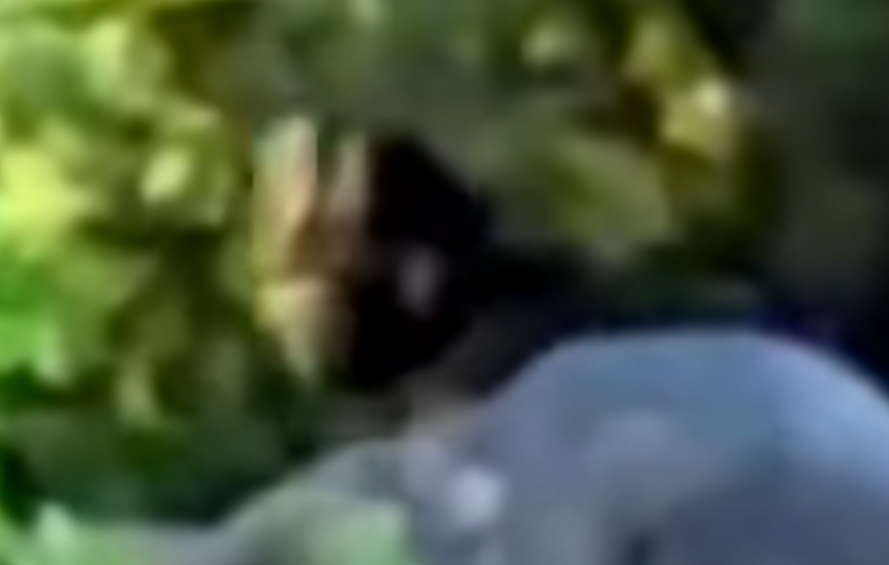 The first image clearly depicts the torpedo-like cone head of the Jack Link’s Sasquatch costume, and it is reasonable to believe a fair amount of money was invested into this one that would be beyond the financial boundaries of most pranksters. The second is a still from the untraceable “Independence Day Bigfoot” video, and while it was a respectable attempt it is obvious here that the crest peaks in the wrong spot relative to the PGF and was shifted forward due to the physical constraint of fitting a high vertical human forehead into a mask.

Faking a convincing head shape is extremely expensive and a huge pain in the ass, and even if done well it is still very distant from the real anatomy it is attempting to replicate due to the simple laws of rigid body physics. Hoaxers will either not bother to show this part of the body (which in my book disqualifies footage from consideration) or will not bother to spend the time, effort, and expense to make something that will look substandard anyways. The head is such a strong indicator of biological plausibility that any video showing it in side profile can be immediately disqualified based on inspecting the outline if it shows evidence of a vertical forehead, even if the resolution of the video is low.

So, now that you are armed with some extra evolutionary context and critical thinking skills, let’s try a field exercise. Below is a still taken from a YouTube video posted by RMSO with over 1 million views. What do you see? 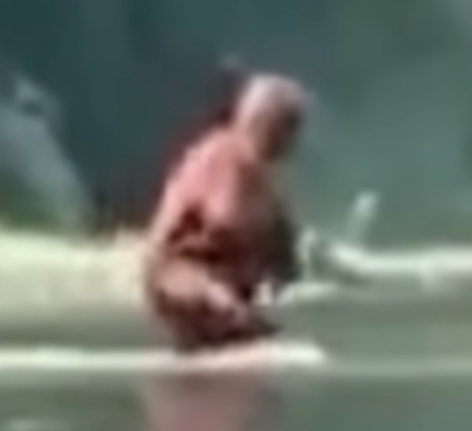 Remembering Dr. Grover Krantz (From “California”, the Magazine of the Cal Alumni Association)